If you’re looking for self-storage in Queens, we’ve got you covered.

Queens is the largest of the five New York City boroughs. Geographically, it is the far-west section of Long Island, but Long Island is not one of the boroughs of New York City. In 1898, part of Queens decided they didn’t want to be part of NYC, and created their own county.

Want to learn more about Queens? Read on …

Queens is diverse, busy and bustling. People are proud of their neighborhoods and it’s actually part of the postal address for Queens’ residents.

Astoria was named after John Jacob Astor to persuade him to invest in the area. He invested $500, built a house on Long Island with a view of Astoria, and never actually lived there. He took a trip on the Titanic, and it didn't end well for him.

Queens is home to the Steinway & Sons piano company as well as Flushing Meadows, site of the U.S. Tennis Association and the US Open, one of the grand slam events in professional tennis.

JFK International Airport and Laguardia Airport are in Queens, so is The Rockaways neighborhood, home to the only two surf beaches in New York. Yes, you can surf in NYC.

Five bridges connect Queens to the “mainland” of Brooklyn, including the Ed Koch Queensboro Bridge, the only one of the main bridges spanning the East River that is not a suspension bridge.

The Museum of the Moving Image is in Astoria, and so is Citi Field, home of the New York Mets, the MLB National League East division. Their cross-town rivals, the New York Yankees, play in the American League East and have their home field in the Bronx.

Moving to Queens, or just looking for a change of scenery? Here’s a rundown of some of the best neighborhoods in Queens.

We have several Storage Post self-storage facilities in the Queens area, so we’re sure to have a nearby location to meet your needs:

You will experience all four seasons if you live in Queens, and Nor’easters blowing up the East River are no joke.

With temperatures averaging 26℉ as a low in winter, and upwards of 85℉ in July and August, you'd better be prepared for any weather. One of the advantages of renting a self-storage unit with Storage Post is that they're climate-controlled to keep temperature fluctuations at bay.

And if you’ve moved to the city that never sleeps, you may need access to your self-storage unit at odd times.

Many of our Storage Post locations offer 24-hour access, and our state-of-the-art security system, including digital access, motion-controlled lighting and 24/7/365 security cameras to keep you safe no matter when you are accessing your self-storage unit.

You can also rent a unit, digitally sign the contract, review your bill and pay it online from the comfort of your couch.

We do our best to ensure your possessions are protected, but sometimes things happen, so we offer self-storage insurance for as little as $10 a month.

Why not drop into one of our convenient locations and talk to our friendly staff about how self-storage can help you live life in The Big Apple! 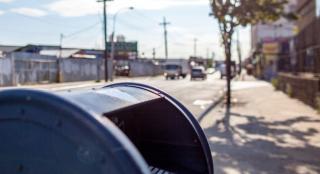