The Battle of Long Island was the first volley in the Revolutionary War. It is attached to the mainland by The Bronx and extends 120 miles parallel to the coast of Connecticut.

Surrounded by the Atlantic Ocean to the east and south, Long Island Sound to the north and New York Bay and the East River to the west, it’s tethered to the mainland by nine bridges and thirteen tunnels. It has approximately 1,600 miles of shoreline.

While Brooklyn and Queens are geographically part of Long Island, they are boroughs of NYC. The biggest population centers of Long Island (excluding Brooklyn and Queens) are Nassau and Suffolk Counties. Back in 1898, part of Queens County decided it didn’t want to be part of the City of New York and hived itself off to become Nassau County. NYC never forgot.

Long Island has seen its share of famous residents: Theodore Roosevelt, 26th president of the United States, lived in Sagamore Hill on the north shore of Long Island until he died in 1919, and Sagamore Hill is the site of a museum in his name. Mariah Carey, LL Cool J, and Kevin James were all born on Long Island.

And the Hamptons on the eastern shore of Long Island is the playground of the rich and famous, including Anderson Cooper, Neil Patrick Harris, Beyoncé and Jay-Z, Robert Deniro, Robert Downey Jr. and Calvin Klein.

When you’re here, you can visit the Long Island Aquarium and take the Atlantis Explorer Boat tour down the Peconic River, or you can literally swim with the fishes in a shark cage encounter. You can also visit the Montauk Point Lighthouse at the farthest point east on the Island. It was commissioned by George Washington in 1797 and is the oldest lighthouse in New York State.

The Old Westbury Gardens, the former home of John S. and Margarita Grace Phipps, will transport you back to 1906 and the Golden Era of stately homes and is listed on the National Register of Historic Places.

Long Island is 118 miles long and only 20 miles wide and has 95 separate incorporated villages. Excluding Brooklyn and Queens, the population is 3 million.

WeFor the best neighborhoods in Long Island, we looked at stats for things like crime, demographics, diversity, transportation and attractions. into account. Let’s look at the best Long Island neighborhoods (in alphabetical order.) 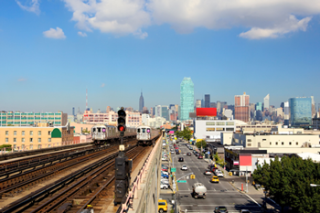 Great Neck Plaza, located in Nassau County in Long Island, earns an A+ from Niche.com for public schools, health and safety, and good for families. It has an A for outdoor activities and nightlife and an A- for diversity.

Fifty-nine percent of residents rent rather than own their dwelling, and with a median rent of $1,958, it explains the C for the cost of living. Niche rated it No. 1 out of 902 best places to live in the USA.

Plus, Nassau County has its own police force. The county was named the safest place to live in the United States in 2020.

Travel from Great Neck Plaza to Manhattan will take you 46 minutes by train, 90 minutes by bus and 30 minutes by car. A taxi ride to the Big Apple will take 30 minutes at close to $200. You can also take a ferry from Long Island to New York City.

The town of Hempstead, in the west-central part of Long Island in Nassau County is a bit of a misnomer since it comprises 22 incorporated villages and 34 unincorporated communities.

During the Revolutionary War, settlers on the south shore were pro-Britain, and the north shore was pro-revolution. In 1784, Hempstead was divided in two, North and South Hempstead, but the town record is a bit vague on why.

Like its neighboring communities, Hempstead was part of Queens at one time and then joined Nassau County in 1899, except for the “westerly part of Hempstead, the Rockaway”, which remained part of Queens.

Hempstead Plain was the launching point of Charles A. Lindbergh’s solo flight to France in 1927. Rapper A+ (born Andre Levins) was born in Hempstead. So was illusionist Criss Angel.

Niche gives Hempstead an overall A- grade, with A+ for health and fitness and outdoor activities, A for public schools, diversity and nightlife, and A- for good for families. The population is almost 768,000, the average age of the population is 25 to 55 and the median household income is $110,000.

Most people own their homes, and Niche lists the median housing value at approximately $456,000. It is considered a dense suburb. AreaVibe.com lists the crime rate as 36% less than the national average, although violent crime is 41% higher. That being said, there were only 876 reported crimes in 2019.

Unless you’re Charles Lindburgh (and anyone who has ever flown into Laguardia knows what a zoo that is), travel from Hempstead to Manhattan is going to take you 35 minutes by train, 35 minutes by car, and about $7 in tolls, or a fun bus/subway combination that will take you 1 hour and 20 minutes, cost you $7 and make you wish you took the train.

Technically part of the town of Huntington, Lloyd Harbor is an incorporated village on the north shore of Long Island. With a population of only 3,400, unchanged since 1970, all boards and commissions are volunteer-based.

And at just 9.2 square miles, it’s the second-largest incorporated village in New York State and includes Lloyd Neck and the northern portion of the West Neck peninsula. Until 1886, it was part of Queens and then seceded and became part of Suffolk County. The borough of Queens never forgot.

Charles Lindbergh, Billy Joel and Christie Brinkley, Robin Gibb and for a time, Angelina Jolie and Brad Pitt have called Lloyd Harbor home. As late as 2004, Lloyd Harbor had no street lights, and it gets dark early in the winter.

Niche gives Lloyd Harbor an overall A rating, with A+ for public schools, good for families and health and fitness, A for outdoor activities and A- for nightlife. It earns a C for diversity, although it was the home of the first published African-American poet, Jupiter Hammon (who was born and remained enslaved to various members of the Lloyd family until his death around 1806, in spite of being an active abolitionist.)

The Village has a 13 member police department. The speed limit is 35 MPH, and there is no parking on any village street. Niche gives an A- for crime and safety.

The median house value is $1.5 million, and 95% of residents own their homes. 41% of residents have a master’s degree or better, 34% have a bachelor’s degree and 14% have at least some college.

If you’re going for dinner, read a couple of newspapers. It’s going to take you over an hour to drive from Lloyd Harbor to Manhattan; the train will take you 90 minutes, a taxi will cost you $200 to 300 dollars and over an hour of your time.

Long Island is unapologetically independent. With miles of beaches, lighthouses and tons of historical places, there are many things to do and see within a short drive.

If you need a place to stash your boat, kayak, canoe, fishing equipment and sandcastle building material over the winter, Storage Post has several locations in Long Island to make it convenient and a variety of units to meet every budget.